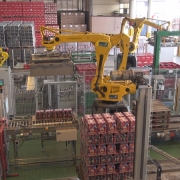 UK manufacturers must tip the balance in favour of automation to avoid falling even further behind international competition.

As the only G7 country with a robot density below the world’s average, the UK has just 91 units per 10,000 employees. According to a recent report*, not only is the UK using fewer robots, but the country is lagging behind in the productivity stakes, and is currently ranked as the 20th most productive country in the world.

The UK led the First Industrial Revolution by embracing new technologies and the opportunities these created. However, unless British manufacturers significantly increases its adoption of robotics and automation, and take full advantage of the technology available, foreign productivity will increase and the UK will be left trailing behind in the Fourth Industrial Revolution.

Earlier this month, the Chancellor announced a super-deduction tax allowance on plant and machinery to give the sector the boost it needs. From April 2021 until March 2023, any business investing in plant and machinery can take advantage of the 130% tax break which will provide 25p off company tax bills for every £1 spent on qualifying machinery.

Manufacturers now need to exploit this and realise the benefits robotic integration can yield.

Demand for robotics within the UK has undoubtedly increased. In fact, in 2019, capitalising on its 40 years of success in automating global food manufacturing facilities, Endoline Automation launched a sister company – Endoline Robotics. However, since delving into the world of robotics with strategic partner FANUC UK, the company recognises that UK manufacturers still need further education on the paybacks of robotic systems.

While most do understand the efficiencies gained from automation, the belief that it is expensive is still a barrier, particularly for SME’s and manufacturers on short term retailer contracts. However, when you consider that, as a country, we are around 30% less productive per hour than a German manufacturer, then the financial impact of not automating is clearly far greater.

Endoline Robotics appoints new UK Sales Manager
Scroll to top
This website uses cookies to improve your experience. We'll assume you're ok with this, but you can opt-out if you wish.Accept Read More
Cookies Policy