Endoline Robotics were delighted to participate within FANUC’s first ever Manufacturing, Automation, and Digital Transformation Open House. The inaugural event brought the manufacturing industry together in a bid to change the perception of automation in the UK.

Held at FANUC’s state-of-the-art UK headquarters in Coventry, over 600 manufacturing professionals from across the UK attended the event. Discussions held over the course of the three days responded to some of the industry’s most burgeoning questions on automation in UK manufacturing.

During the event, Endoline Robotics exhibited a fully automatic palletising system incorporating a 6-axis FANUC M-710iC series industrial robot. Director of Sales for ERL, Grigory Belosky, commented: “We were delighted to play such a pivotal role alongside FANUC. A sister company to Endoline Automation, ERL was launched in a direct bid to respond to growing calls from UK manufacturer’s for fully automated end of line systems with robotic solutions.” 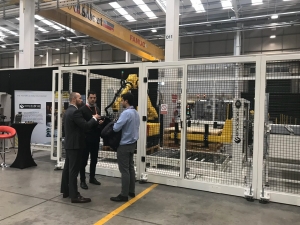 Recent figures suggest that UK automation is currently falling behind other leading manufacturing nations, which is having an impact on its ability to keep pace in terms of productivity. To illustrate the point: there are just 71 industrial robots per 10,000 workers in the UK, positioning it behind 14 other European countries. In contrast, Germany has 309 units, contributing to a production rate which is 30% higher per hour than the UKs.

“It is important that we clearly communicate and educate our customers on how robotic automation can improve productivity.” Continues Grigory. “Automation needs to evolve within the UK, and robotic solutions will play a vital role in this progression. For almost 40 years Endoline Automation has been a leading provider of case erecting and sealing automation. Now, following the launch of Endoline Robotics and through the strength of the FANUC brand, we are able to offer our customers robotic solutions to help drive up robotic adoption in the UK.” 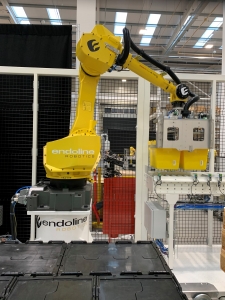 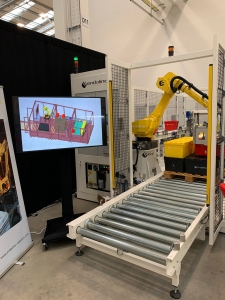 2020 must be the year for robotic automation within UK manufacturing
Scroll to top
This website uses cookies to improve your experience. We'll assume you're ok with this, but you can opt-out if you wish.Accept Read More
Cookies Policy